For the past two weeks, and as part of a friendly challenge between friends, I worked on a remake (well, more like a port) of a game called "Dr. Drago's Madcap Chase" (or in the original German, "Die Total Verrückte Rallye")

If you don't know the game, don't worry too much, as from my sightings in forums, this is a relatively unknown game from BlueByte (you know, the guys from Albion... although you probably don't know that one as well. However, The Settlers will surely ring a bell).

I discovered this game many years ago, and I thought it was very funny. Basically, it's a Monopoly game with a few additions, but you really need to try it with a few friends to see all the little details they added.

Then, I mixed all this using the awesome Haxe Flixel engine. That means the game works with little or no changes on a computer (Mac / Linux / Windows), iOS (it looks very nice on iPad, as the original assets are exactly the right resolution, 1024x768) and Android (and some others, like Tizen, Firefox OS or Blackberry, but I haven't tried those). 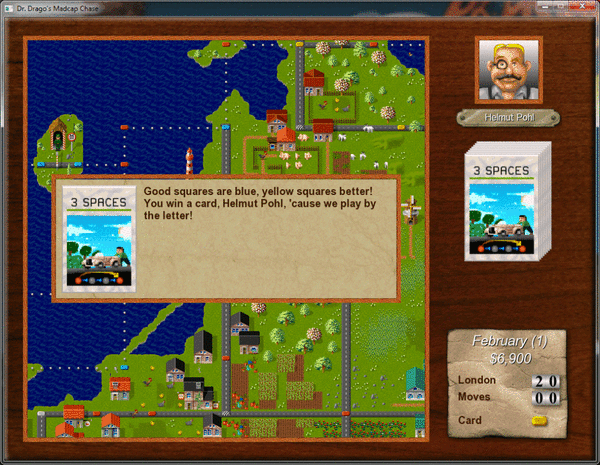 It looks almost exactly the same as the original (some things are pixel-by-pixel in the same position), although it has better font rendering, some dialogs are centered differently on the screen, and a few fades for menus and other interface elements.

The game is far from finished (two weeks working sporadically is not enough to finish a game this size), but you can move around the map, winning or losing money, as well as getting cards (like the screenshot shows). Your destination is also shown and the shortest route is displayed for you using arrows, like in the original (the algorithm might be different, though).

We have another challenge (this time a full month) so sadly I won't be finishing this anytime soon. I, however, might finish it in the future as it looks too nice not to.

I'd also like to publish the source, although I need to find a way of not having to upload the assets, as I don't want any legal trouble (doubtful, but who knows). Maybe releasing the tools to automatically create the new assets from the originals will suffice. Even the demo has (almost) all the needed assets, although they are in a lower resolution.

Anyway, drop me a line on my (mostly empty) Twitter if you want any details.